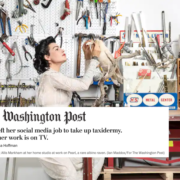 If you know the story of how I came to be a dating coach – you know that I have a soft spot for entrepreneurs who strike out on their own to pursue their passion.

Allis Markham of Prey Taxidermy is so magnificent and inspiring! I’m so honored to share her story for the Washington Post on newsstands this Sunday.

She left her social media job to take up taxidermy. Now her work is on TV. 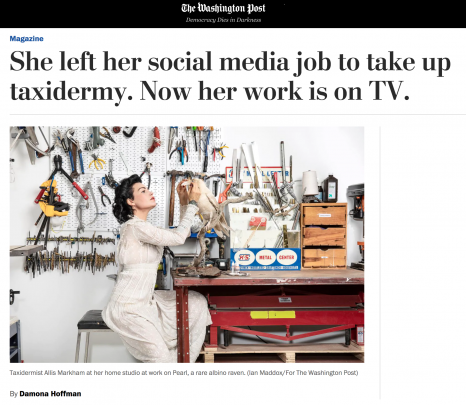 You never forget your first deer, especially when it took several days to skin, stuff and dye the fur pink. It was 2013 and Allis Markham was working as a director of social media strategy at Disney in the Los Angeles area when she decided to spend two weeks in Montana to learn the art of taxidermy. At the time, she was interested in creating avant-garde pieces that merged her love of wildlife with her passion for art, hence the pink deer.

She went on to volunteer at the Natural History Museum of Los Angeles and studied under Tim Bovard, the museum’s head taxidermist. “I volunteered so long I think they were embarrassed to not pay me anymore,” Markham remembers. Though she says she would have paid them for the experience, she officially became part of the team after a year of apprenticeship. Her time there shifted her focus from “rogue taxidermy” to creating works that were true to their natural state. (She gave the pink deer away.)