Has something happened in your past that is preventing you from finding love?

Today’s episode is all about finding love after loss, traumatic events, unfulfilling relationships and everything in between.

Nora McInerny is the host of the podcast “Terrible, Thanks for Asking” and the author of several books including No Happy Endings and The Hot Young Widows Club.

As she says, Nora found lightning in a bottle in a once in a lifetime love… and then lost him to stage 4 brain cancer. She had to rebuild her life in her late 20s, coping with the loss of the love of her life, all while raising a son.

And we thought we had emotional baggage.

She’s going to talk us through what it was like to find love once again after loss and what it means to date with baggage. 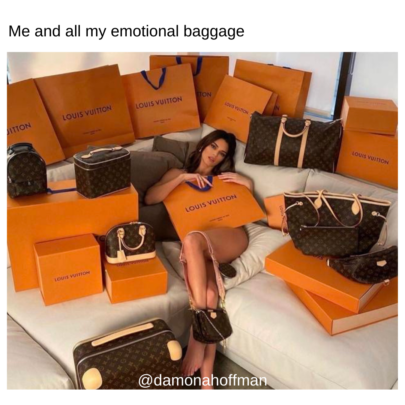 Hopefully yours is a cute Louis Vuitton clutch. But even if it’s a thick multi-compartment trunk or army style duffle, we’ve got you covered.

But first there’s the news:

(3:25) Famous people are invading dating apps. So how do you hook up with a celeb?

Influencers and celebs are flocking to methods of finding love online – first dating app but now mostly through Instagram.

Ben Affleck and Matthew Perry were among celebrities who were outed on dating apps. Damona has thoughts on this:

Secondly: Dear Celebs, if you’re afraid of a publicity seeking match, then avoid the texting trap and drive towards the phone call.

(9:31) A new relationship trend among the 65+ crowd that you might need to try

Living apart as an older couple may be beneficial to a relationship’s success. Older women have spent a lot of their lives inhabiting archaic gender roles and are now to avoid that in end of life care. The New York Times reports that the LAT Trend (Living Apart Together) is the solution to this problem.

Here’s what you need to know if you’re not in this age group: Let’s stop rushing into moving together. Damona is seeing a lot of couples move in together out of convenience rather than out of an actual desire to move into the next stage of the relationship.

Nora McInerny is the creator and host of the award-winning podcast “Terrible, Thanks for Asking” and the best-selling author of the memoirs It’s Okay To Laugh, (Crying Is Cool Too) , No Happy Endings, The Hot Young Widows Club.

Her work has appeared in publications like The New York Times, Time, Slate and she has spoken on TED’s main stage.

And now, she’s here on Dates & Mates to talk to us about loving again after loss and dating with baggage.

(14:28) Question: Do you avoid dating people with kids? America is moving away from the traditional 2 adults /2.5 children household and leaning heavily into “blended family” territory.

(18:19) Coping with Loss & Tragedy: After Nora’s husband passed away from brain cancer, her life changed forever. She learned how to cope from the loss and come out stronger on the other side.

(25:28) Do you people as romantic and non-romantic? After her husband passed away, Nora viewed every guy as just a fling to keep from feeling too attached. She wanted to belong to nobody until she connected with her current love.

(39:33) The chair that changed everything: Against all odds, Nora met Matthew and found someone who could find a place in her family’s life.

(51:08) Baggage & Relationships: Everyone’s been through trauma in different ways. Our baggage makes us unique and doesn’t have to impact creating meaningful relationships.

Get $100 OFF your next all-inclusive beach vacay with Cheap Caribbean!

It’s date night in a box! Go to hellofresh.com/dates14 and use the special code DATES14 for 14 FREE Meals + FREE Shipping