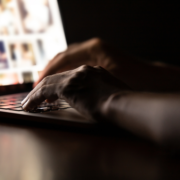 Before you start this article, know that I don’t think dating apps are full of catfish. I have never come across a catfish that wasn’t easy to spot. And I know you know how much time I spend looking at online dating profiles for my clients. If you keep an eye out for the signs of a fake boyfriend, you won’t fall prey to romance scams.

Recently a former client came to me for advice about his daughter who was in an LDR (long-distance relationship) with a man she met online. He had some valid concerns: First, the girl is 19 and her online boyfriend is 25. That’s quite an age gap which puts them in two very different places in life. She’s just graduating high school and he’s already beginning his career. I can see why a father would have concerns about a potential catfish.

Here’s the real kicker: they have never met but she’s totally smitten and willing to put her love life on hold. She’ll even miss her senior prom because she believes she is in love and he will find her and sweep her off her feet.

Here’s Why It Matters

I’ve written in the past about catfish scams which often target older women. However, in 2020, romance scams reached a record $304 million in losses reported to the Federal Trade Commission in the United States. That’s up about 50% from 2019.

Increasingly, younger women are falling into the emotional catfish, which can have even more devastating consequences when they end (and they most often do end).

The catfish victim might have feelings of shame, may doubt their choices, feel unworthy of love and can have trouble connecting to a new suitor IRL (in real life.)

The point of online dating is to actually date.

It troubles me that so many virtual connections never make the transition into in-person dates,  wasting tons of time and emotional energy in the process.

If you think you or someone you know has developed an emotional attachment to a man they met online and it may be going nowhere, here are 4 Sure Signs Your Online Boyfriend is a Catfish:

He Will Never Meet You In Person

Even if you’ve talked on the phone and heard his voice and he “sounds” nice, if he doesn’t do everything in his power to see you face to face, he’s a catfish. Men want physical connection and ultimately are driven to have sex with women they are attracted to. Simply put, if a man wants to date you, he will find a way to get to you.

His Online Identity is a Mismatch

If you Google, Facebook, or Instagram stalk him and his name or photo doesn’t match up with the guy you think he is, you have a problem. No matter how well he tries to explain this away, it’s shady. Proceed at your own risk.

He Only Calls You At One Time Of Day

If your man is only available late at night or on the weekends and he always denies your call if you ring him during off-peak hours, you are probably his side chick. He doesn’t have a second job or a really busy schedule. He might not be a catfish, but he is playing you.

He Has Lots of Pretty Lady Friends Online

There are many ways that a Facebook profile can be a dead giveaway for an online predator. Most commonly if he has a very small and seemingly unconnected group of friends and/or he’s friends with an over-abundance of women it could mean that he’s using this account to connect with his virtual harem which is not something you want to be part of.

It’s so hard to watch a woman waste her time with a catfish and these sort of phantom relationships give online dating a bad name. Meet your e-crush early and often and do your due diligence to make sure your online boyfriend is the real deal.