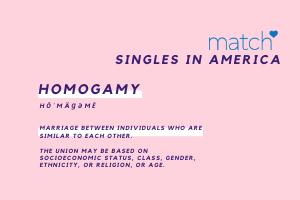 CALLING ALL SINGLES IN AMERICA

Match released their 2020 Singles in America study and we are so excited to share some key points that we found super relevant to Dates & Mates listeners:

The study found 1 in 4 singles had sex with a non-romantic roommate. That’s about 24% of singles who had sex with their roommate during lockdown. Sexologists call this “situational sexual behavior”, which means social or environmental factors cause people to express sexual behaviors differently than their previous preferences.

Damona says to be mindful of your choices, because they do have repercussions.

Now 53% of singles say prioritizing their search for a relationship more now than they did before the pandemic. Singles are focusing less on physical attraction than before.

This is the first time Match has studied this particular subject and we are so excited to see that more people are open to new dating possibilities!

In the past, singles tended to seek partnerships with people with cultural similarities (same race, religion, socioeconomic status, etc.). This is called homogamy.

Now 64% of singles say they cannot have a relationship with someone who has a very different view about racial equality. Women feel stronger about this than men (72% of women vs. 59% of men).

Since the murder of George Floyd and the re-start of the Black Lives Matter movement, 24% of singles are now open to dating people of a different race or ethnicity.

How has the changing political climate affected your views on interracial dating? Are choices in dating accurately reflecting these views? If you don’t know, check out Damona’s article in the Washington Post on Racial Bias in Dating.

The Phases of Dating During COVID
Scroll to top