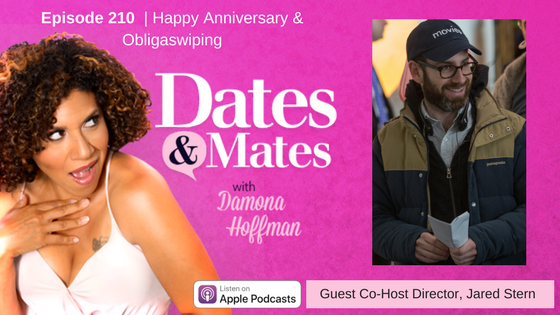 Our guest co-host this week was Jared Stern. Jared’s the writer, producer, and director of the Netflix Original romantic comedy, HAPPY ANNIVERSARY, which is available for streaming now. He’s currently in production on an adaptation of GREEN EGGS AND HAM and has written on WRECK-IT RALPH, THE INTERNSHIP, and THE LEGO MOVIE.

Can you swipe right on a coworker?

40% of office workers have had a workplace romance, and 72% of those don’t feel like they need to hide it. While it seems like it would make sense, work culture expert Alison Green gives a hard no to swiping right on those you work with. She says there’s too much potential for miscommunication and unequal expectations. You can read more via Quartz here.

There’s a new epidemic taking root where people blindly swipe on apps with no intention of actually meeting up. Many people these days go hard on dating apps for a day or two, grow bored, and abandon ship. Being on a dating app is now just a defense mechanism so you can say you’re trying. Read more about what we need to do to fix this via Cosmopolitan here.

Donald Trump Jr. was having an affair with Aubrey O’Day

It’s come about that while Vanessa was pregnant, Donald Trump Jr. was out trying for a baby with singer Aubrey O’Day. Aubrey released songs after the affair called “Somebody That I Used to Know” and “DJT.” Read more about what Vanessa did when she found this out via US Magazine here.

We pull the best questions posted on The Textpert App, including:

Damona had something that got under her skin that she needed to bring out into the world: women who sit on the sidelines waiting for romance to happen. It’s 2018! Get out there and find yourself the partner of your dreams.