DATING AFTER BREAKUP OR DIVORCE???

I get a lot of questions about the rules of dating amidst a big breakup. Especially during a divorce, can you date someone who is separated but still legally married? And how can you get back out there after divorce and avoid making the same relationship mistake again?

Today, divorce lawyer Jacqueline Newman is here with tips on how to date during a divorce, and the steps you need to take when dating after a breakup as detailed in her book, The New Rules of Divorce: Twelve Secrets to Protecting Your Wealth, Health and Happiness.

(1:55) Getting cuffed for the holidays: Cuffing season is upon us – which means a new study from Mashable about cuffing with a breakdown on this year’s season of love.

Now if you don’t know, “cuffing season” ranges from around the beginning of October to Valentine’s Day, and refers to wanting to settle down more in dating (read: cuff-up with someone for the colder months.) There are a number of factors that make us consider long-term relationships around this time:

The Mashable study surveyed 2,000 American adults, and 71% said they’re more interested in long-term relationships now compared to pre-pandemic (which we saw in another study D&M covered by OK Cupid).

Logan Ury (Relationship Scientist from Hinge previously featured on D&M) says in the article, this means “you can skip the small talk and have a really interesting conversation,” and go in on a deeper level. HOWEVER, this can lead to burnout very quickly, especially if you’re putting emotional energy into every person you may have an ounce of chemistry with.

My advice: stay in the game, and don’t run at the first sign of conflict. We have to push through the moments where we feel like giving up because we’ve put 100% of ourselves into dating apps with zero payoff. Try to swipe a little more liberally to increase the amount of conversations you’re starting, but be more vigilant with your screening process of who you’d actually like to meet in person. Remember – it’s just a conversation, not a marriage commitment

(8:14) How to dating with Social Anxiety

Dating can feel impossible at times if you experience social anxiety – but trust me you are not alone. Especially after a whole year sans cultural appropriation, no one feels 100% comfortable in person anymore.

This article from Psychology Today covers a study published in Journal of Social and Clinical Psychology which examined the impact of social anxiety and depression on adult relationships.

I was inspired by this article to find some tips to calm your mind when going on dates:

I’m joined by Jaqueline Newman, the Managing Partner at a top law firm in Manhattan. She specializes in complex high net worth matrimonial cases and also in negotiating prenuptial agreements. She’s the go-to for divorce advice and has appeared on NBC, ABC, CBS, The New York Times, and so much more.

She tells us where she sees relationships go wrong and how to rebrand yourself after a breakup.

(14:58) What really causes divorce?: Jacqueline gives two main reasons: failed expectations, and communication and not being able to “fight well.”

Everyone loves the honeymoon phase of a relationship, but it’s inevitable that couples will get into disagreements. According to Jacqueline, what really matters is how you get through those disagreements. A big part of this is tabling your emotions during a disagreement – people can forgive, but they don’t forget.

From a divorce perspective, if you say some really harsh things to your partner in the heat of the moment, this has serious consequences for your relationship and will likely come up in divorce proceedings. So don’t hit below the belt, avoid name-calling, and don’t push the buttons that you know would really hurt the other person. Remember: if you do find yourself getting emotionally charged, separate yourself from the conversation until you can think more clearly.

(20:10) Someone’s gotta wash the dishes: Can you relate? Jacqueline hates doing the dishes. She would always ask her husband to do them, they would never get done, and this would lead to an argument.

(23:12) Social media sets up our expectations: Failed expectations are a big reason for divorce. Jacqueline says that social media is mainly responsible for this. Even though we all have a sense that what other people post is not the whole picture, it can be really easy to compare our lives to Facebook posts. The bar we set for our relationship is so unrealistically high that when things get hard in our own relationships it brings up a lot of self-doubt, anger, and resentment.

(26:08) When is the right time to start dating amidst divorce?: Before getting divorced AT ALL, Jacqueline will ask her clients “are you sure you want to get divorced?”

If she hears even a nanosecond of hesitation, she will tell her clients to go to marriage counseling first. Getting divorced takes a huge financial and emotional toll, and it’s hard to turn back. So you need to be absolutely sure before going through with it.

HOT TAKE: As far as dating, Jacqueline says that she thinks dating during the divorce process is okay but who you are dating should not meet your kids. The point is to move forward with your life as much as possible.

Plus, she encourages you to celebrate if your ex is dating someone new, because a happier person makes for an easier divorce. Seriously, it’s a lot harder to divorce a bitter person.

(29:46) Finances in non-marriage: Mixing finances with your partner when you’re not married can become a bit more complicated. Jacqueline says to check your state’s laws on finances because some states such as New York will not acknowledge common-law marriages (i.e. without having formally registered the relationship as a civil or religious marriage). Although things like child support remain practically the same, things you would otherwise be entitled to, such as asset growth or spouse support, would not be required of the other person by law.

(35:50) Living your post-divorce life: A lot of opportunities exists post-divorce since you’ve undoubtedly grown and learned a lot in the process. Jacqueline asks that if you’ve just been divorced, prioritize self-care.

The divorces process is a tiring one, especially if a custody battle or a lot of negotiating was involved. Make sure that you’ve fully healed and taken the time to know yourself again so that you can go into dating or a relationship and be able to give as much love as you have for yourself. Also, consider making a 5-year plan for yourself so you are really clear on where you want your life to go from here and on the kind of person you want to be.

Be sure to get a copy of Jacqueline’s book here. 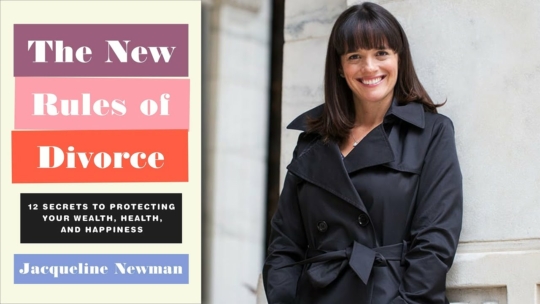 She Podcasts Live: Thanks for coming to my talk!