­
Previous Next
What’s Wrong With A Little Casual Sex? 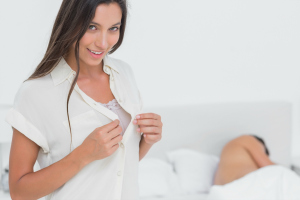 Thoughts on the effects of casual sex are being debated more and more. A recent article from Psychology Today talks about the complexities of casual sex on our psyche. The truth is that there are many factors at play and many areas that are yet to be discovered. I tend to be on the side of delaying sexual gratification until commitment of some sort comes into play. I’m no psychologist so, my opinions are based on my own observations. Here’s what I think:

…biologically our bodies are meant to bond with another person when having sex.

When engaging in sexual activity with a partner chemicals in the body kick in. From dopamine to oxytocin, biologically our bodies are meant to bond with another person when having sex. This is why you feel closer to a man after coitus. When this bond is broken after someone goes home, there is often a feeling of loneliness and uneasiness that settles in. Which leads to further bad decisions, such as drunk dialing, booty calls and late night texts. When efforts for another meeting aren’t returned, the feeling of rejection is furthered, leaving a person feeling depressed.

The more someone has to strategize, wonder and visualize getting you into the sack, the more their mind is geared in your direction…

Also, by ruining the thrill of the chase by sleeping with someone within days of knowing them can kill off any possibility of romance. The more someone has to strategize, wonder and visualize getting you into the sack, the more their mind is geared in your direction, eventually leading to their attraction to you. It’s not a game or a trick to get someone to like you, it’s asserting your personal morals on your sexual timeframe. It shows you respect yourself and your body not to throw it around to every attraction person you meet. This makes you more desirable as well as shows you’re worth the wait.

Casual sex also brings with it a higher risk of exposure to STDs, and some STDs are incurable. From a random night of fun you can be faced with a lifetime of genital warts or, worse, a disease that can kill you. While you will eventually adjust to a new lifestyle, there is no positive feeling that can come from learning you have to take pills to keep herpes at bay for the rest of your life.

Studies show that those couples who wait to have sex are happiest in their relationships. Analysis showed that the women who had waited to have sex were happier and those who waited at least six months scored highly in every category measured than those who got intimate within the first month. For men, it was reported that they had fewer fights with their mates.

Since sex is the ultimate icing on the attraction cake, once you’ve done it it’s hard to go backwards.

Having an intimate conversation instead of an intimate encounter can bond you with another person. By disclosing personality, goals and ambitions uncovers more about you than any great blow job can. But if you skip those details and go right for sex it makes it harder to blow one another’s mind in deep, revealing conversation. And, to quote your mother, why buy the cow if you’ve already got the milk?

Maybe I’m a little “old-school” but I’m interested to hear what you think. Are things changing? If they are, is that a good thing? Let me know in the comments below.

If you want to know what 20 of the worlds lead dating experts have to say about this and other modern dating dilemmas, get your copy of my S.M.A.R.T Speaker Series today!