Unplugging from the Matrix

­
Previous Next
Unplugging from the Matrix 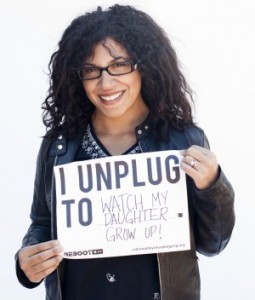 My family and I participated in the National Day of Unplugging last weekend. The idea is that you take 24 hours to power down from your computer, TV, phone, and iPad and focus on recharging yourself instead. For many people this is probably an insurmountable task. You must plan ahead, return to writing your appointments down on paper and force yourself to make plans that don’t require connectivity.

Everything was going fine until I remembered that I had a board meeting for a community group for which I am the secretary. The secretary who always takes copious notes on her handy-dandy MacBook Air. As I scribbled the notes on paper but then I began to question if that was “allowed.” I was unplugged but was I really UNPLUGGED? Where did the boundary between work and play begin? After two glasses of wine, I decided it was most-definitely not work but I vowed to try to unplug harder the next day.

It actually is harder to stop than to start, however; and after a weekend of family connection without electronic interference, Monday inevitably rolled around and I couldn’t believe manage to get myself back online. I’m not saying it was hard to physically log onto the internet but mentally to focus on work. I’m a self-admitted work-a-holic but for one weekend I became a family-a-holic and I got addicted.

The interesting twist came when I was having a conversation with some single folks at the station after my radio show on Wednesday. These two proclaimed that they had gotten so used to being single that they didn’t really feel like changing their lives for a relationship. So, for the moment at least, they were resigning themselves to be happily single…and stuck in their ways.

As a married woman, I can relate. Partnership can seem like a tightly guarded prison that traps your individuality and freedom. Being married means that you are no longer just responsible for yourself but you are an extension of the other person as well. You have to notify someone else where you’re going to be, check with them before accepting invitations, and make a point of spending time with them that you could be spending doing a myriad of other things that you enjoy. Singlehood is like a comfortable pair of baggy jeans. Once you’ve been wearing them around the house for a weekend, the thought of squeezing into a restrictive pair of khakis and shuffling off to work sounds quite uncomfortable and unappealing.

Being unplugged for a weekend was uncomfortable at first but once I dove in, I never wanted to leave. Resigning to being single because it is uncomfortable to adjust your life to accommodate another person is like being so buried in your iPhone that you miss the real world around you. Yes, dating can be awkward at times but when you find the right person it is as freeing as being unplugged from the matrix.

Happily single but ready to take the plunge? Dear Mrs D’s new book Spin Your Web: How to Brand Yourself for Successful Online Dating can help.