­
Previous Next
The Real Reason Miss USA is Single 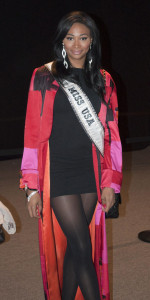 Nana Meriwether is a knockout by all accounts.  Although, she just relinquished her Miss USA title a few weeks ago she still “got that something.” So it’s understandable why many people are in an uproar, not only because Miss USA is single, but because she’s also on the online dating app, Tinder. When Miss USA needs help finding dates you know that there must be something amiss in the dating scene; however, the problem is much deeper than it seems.

Nana Meriwether is a knockout by all accounts.  Although, she just relinquished her Miss USA title a few weeks ago she still “got that something.” So it’s understandable why many people are in an uproar, not only because Miss USA is single, but because she’s also on the online dating app, Tinder. When Miss USA needs help finding dates you know that there must be something amiss in the dating scene; however, the problem is much deeper than it seems.

The first issue is that some people are still hanging on to an antiquated view of online dating, seeing it as a wasteland of sad, lonely people who cannot connect with a date in person.  However, Nana Meriwether framed the reality of the situation more effectively in a recent New York Magazine article, “I think when you’re single, you should try all avenues. And now there are so many new apps for dating — this one is just really fun.”

Particularly for Millennials—which is the generation of the 28-year old South African-born beauty—the stigma around online dating has disappeared. Rather than seeing technology as a deep, dark void where predators lurk, it’s their lifeline for communication.  It’s also telling that she chose to use a smartphone app rather than a traditional dating site.  Bringing your profile and matches with you on the go speaks to the evolution of online dating into our social lives. Tinder in particular, which allows you to approve or pass on dates based on their photo and basic details alone, is the perfect way for a beauty queen to meet new people in a big city like New York.

However, to understand the real reason Miss USA is single, you have to know more about her.  First, she is tall, 6 feet tall to be exact. This means if she wears an average sized heel to a date she’ll be about 6’3”.  Second, she’s athletic. In fact, during her time at UCLA she was twice named All-American in volleyball. Which brings me to my third point: she’s smart.  Not only did she graduate with honors from UCLA but she also went on to complete pre-med studies at USC. She comes from good genes. Her father was the first African-American to graduate from Duke University’s medical school.  Which raises my final point, she’s also black.

Dating By Height
Shorter women envy tall ones for their long legs and curvy lines but in the dating world, petite always wins out.  The average male in America is just 5’10”, which puts Meriwether at nearly half a foot taller than most men.  However, it’s not the men who are enforcing this rule that the man must be taller than the woman. According to a recent study, just 4% of women would consider dating a man who is shorter than she. So this limits Meriwether’s pool of options to just 5% of the population of American men who are over 6’3”.

Competitive Dating
We know that women are staying single longer with the average marriage rate declining over the last 50 years and median marriage age for ladies at an all time high (27 in the U.S. and 30 years old in the U.K.).  So what has changed?  Birth control has certainly had an effect, enabling women to postponing having a family.  However, women have also been stepping into new leadership roles at work.  In my work as a dating coach I’ve observed that the biggest challenge for professional women is being able to turn off those competitive and even sometimes masculine qualities in their personal lives. Even though she can walk the stage with feminine poise, are the skills that made her a powerful athlete hurting her dating life?

Smarter Dating
On the surface, it seems that intelligence is a virtue that people seek in a long-term partner. Most women; however, tend to look for someone with a similar educational background.  With a post-graduate degree (particularly from an elite school), Ms. Meriwether’s pool is reduced to a mere 5% of online bachelors who share this distinction.  Furthermore, a recent University of Chicago study showed that in online dating men actually avoided women with higher education levels.

Dating Your Race
This is the biggest factor in Meriwether’s singlehood.  Let’s say she’s looking to date a black male.  The interesting fact is that black men with graduate school experience are 30% more likely to marry outside of their race than even black men with college degrees according to sociology professor and author, Michael Eric Dyson.  So let’s say she’s open to dating outside of her ethnicity, as many black women are. In fact, African-American ladies reply to the most messages of any ethnic group according to dating site, OkCupid.  However, the sad fact is that they receive the least number of responses to their inquiries. For every message they send, their response rate is just 32% in spite of the fact that 62% of online daters say that they would be open to dating someone of another ethnicity. So even if she is open to dating across the rainbow, the rainbow might not want to date her.

Miss USA is single, but what does that mean for you?  Perhaps if you have been making decisions about who you want to date based on the criteria above you, too, have been limiting your dating pool more significantly than you realize.  The wonderful thing about online dating is that it opens up a plethora of dating options, but your preferences, habits, and online presentation can make all the difference between feeling frustration and finding love.

If your online dating experience has been less than satisfactory, claim your free video “The Biggest Online Dating Mistakes You’re Probably Making Right Now…and How to Fix Them” to turn around your luck in love.