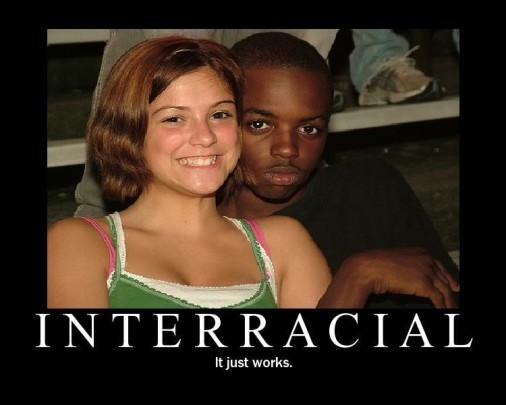 Interracial dating: It does work.

Kayne West’s been at it again. Blaming everything but the kitchen sink on the media’s less-than-glowing coverage of his crazy antics. This time he’s saying that all the shade that’s been thrown at him is due to his interracial relationship with Armenian American, Kim Kardashian. WTF!? or maybe not….  believe it or not mixed couples were allowed to marry less than 40 years ago. That’s pretty recent in the grand scheme of American history. Some towns in the South still won’t marry interracial couples. Not only does racism still exist, but it hinders the quest for finding love. Sadly, online dating sites have reported some pretty shocking statistics about dating outside the box:

Gerald Mendelsohn, a UC Berkeley psychologist, professor of graduate studies and lead author of a study showing that blacks are much more open to dating whites than whites are said, “Those who said they were indifferent to the race of a partner were most likely to be young, male and black.”

Overall, he said, “Whites more than blacks, women more than men and old more than young participants stated a preference for a partner of the same race,”

“The last 40 years have seen a dramatic shift in attitudes in America toward black-white intermarriage – from three to one opposed to three to one in favor,” said Mendelsohn. “Yet, 2000 U.S. Census data shows that black-white couples represent just 1 percent of American marriages,” he said.

So why the stigma with interracial relationships? Well, just like Kanye West claimed, people just aren’t ready to open up their hearts and minds to be open to love. That’s a huge part of the online dating problem. Everyone says that they’re open to all races but when a person outside of their own race contacts them, they are not so quick to respond.

Odds favor white men and asian women online, while white men seem most likely to date outside their race, black women are still the least contacted when online dating. Here’s the problem singles: If you are single and don’t want to be, you can’t stay stuck in the mindset of race, age, or aesthetics. When you bog yourself down with logistics not morals, you’re setting yourself up for failure. Why does your potential mate have to be a mirror image of you if someone from a different culture has the same value system and personality that you’ve been seeking? Would you really give up a chance at true love because of the color of someone’s skin or how they raised religiously? When you stop thinking in terms of ethnicity and start thinking in terms of possibility a whole new dating pool to swim in opens up to you. You say that you’re open to whoever you may meet as long as they treat you well and understand you so why not try to find that special SOMEONE, not a specific BRAND?

If you’re still having trouble online, sign up for my Signature Profile Package to get a fully rewritten & reworked profile that guarantees results!