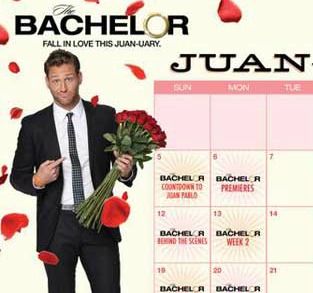 The first episode, the most stressful episode IMHO of the hit show ‘The Bachelor’ gives the 27 ladies one night to try to snag one first impression rose, which guarantees they make it onto the next round. From tears to missing puzzle pieces to gifts for the highly sought after Juan Pablo’s daughter, this show is a tough one to watch. Not only because there are 27 young, beautiful, successful women crying and vying for a man’s attention who they know no more than they do Walt Disney, but because the prize—Don Juan Pablo himself—is really no big prize after all.

Taking a page from the Steven Seagal book of acting, Juan Pablo feigned interest with most of the women before they even completed their sentences and yet 26 women fell head over heels for this guy. Not the 27th though. Opera singer Sharleen snagged the coveted first-impression rose, but said she didn’t feel an instant connection with Juan Pablo, which is what’s she’s looking for. Which just goes to show that the more comfortable you are in your own skin and the more you know what you DO want in a relationship, the more people will gravitate toward your security and confidence in yourself.

Sadly, when it comes to insecurity, a few of these ladies have their work cut out for them. Take Lauren H. for example, who cried about not getting alone time with Juan and then, when she finally did, she proceeded to tell him all about her ex-fiancée who left her. Piece of advice ladies: Make first impressions count. You only have a small amount of time to woo someone so no politics, no religion, nothing too serious, and definitely NO EXES. There’s no spoiler alert here, of course Lauren H. didn’t get a rose at the rose ceremony. Plus, it’s always heartbreaking and embarrassing to watch a woman make a fool of herself for no reason.

An interesting point of note about this new cast of ‘The Bachelor’, Juan Pablo is a former soccer star who grew up Venezuela yet there are no Latin women among the 27 women. Bad diversity casting on ABC’s part.

Juan Pablo was once a contestant on ‘The Bachelorette’ that got passed over only to become the first ethnic star in the hit show’s 17 seasons. Will his background help him choose a realistic woman out of the 18 women who received a rose, or will he succumb to beauty without thinking about his own needs as a father firsts? Time will only tell. But from a dating standpoint Juan Pablo should start to strategize how he’s going to approach his time with each of these women, and definitely hold out on any intimacy with any of them before there needs to be.

These women are operating on the pressure of both television and the public fear of rejection so they may say and do everything just to stay in the game. JP needs to find someone whose values mirror his own, only then can he truly find the woman of his dreams.

Watch ‘The Bachelor’ on Mondays on ABC at 8ET/7C!!