Signal The Fireworks: What Their Body Language Is Telling You

­
Previous Next
Signal The Fireworks: What Their Body Language Is Telling You 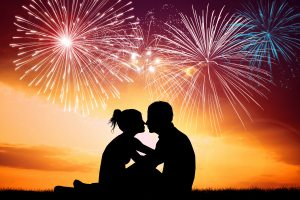 You’ve heard that actions speak louder than words. It’s never more true than with matters of the heart. I still remember the moment when sparks flew on my first date with my husband. I saw him as such a nice guy. Almost too much of a nice guy, perhaps he was a little…. bland? Then, he did something that totally surprised me. He reached across the table and grabbed my hand. It was a direct and clear gesture that said he was interested in me and it played against his nice guy type which made me more intrigued. I’ve come to discover that yes, he is an unbelievably nice guy, but that one decision to touch me on our first date was the defining moment that made me sit up and pay attention to him.

So pay attention daters! If you like them, show them! Here’s how:

Attraction is the easiest emotion to read in a room. A woman’s pelvis will generally turn towards the man she is most attracted to. So don’t watch the eyes, watch the hips.

When we’re connected to another emotionally, we’ll subconsciously mirror their movements. She touches her forehead, he touches his forehead. She leans in, he leans in. My flirting coaches and I often encourage clients to practice mirroring on dates because you can actually create intimacy by triggering their natural response to being mirrored. But make sure not to turn it into a bit from the Marx brothers’ “Duck Soup.”

If a woman is attracted to a man, I always recommend a casual touch on his arm or grabbing his shoulder when he says something funny. When we really mean something, we often emphasize it with hand gestures and touch. If we see a stranger hurt on the street, the first thing we do is run up and touch them and say, “Are you okay?” So in the dating situation, casual touch lets the other person know that you are a safe person for them to connect with.

I often notice this at parties and mixers: A woman will make eye contact with a guy then look away. If she looks back again this is her way of beckoning him and letting him know an approach is warranted. Needless to say, it usually works.

When partners are deeply connected they check in with each other, even if they are on opposite sides of a crowded room. If there is physical space between them, look for that glance that says “I’m okay.” If you do not see it, and still the couple stays physically apart it could be a sign of trouble.

Men often misread or ignore women’s subtle signs. If she constantly looks around the party and avoids eye contact, avoids making any physical contact, and turns her hips away from you, that means she’s not interested. Women will often come to mixers or parties in group and then physically wall themselves off from approaching men. The men who are successful are the ones who catch them by surprise and approach anyway. Any hesitation in the decision or hanging by the table waiting for the right moment will be seen as weakness by the women and will not be rewarded.

Body language is an art form. Make sure to watch lovers interact from a distance, or spy on a first date interaction to see what when wrong and what went right. Essentially if you like someone, touch them casually so they know your eyes are set on them.