No More Lingerie! A Gift-Giving Guide for Men

­
Previous Next
No More Lingerie! A Gift-Giving Guide for Men 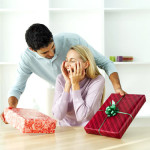 Make sure to buy a gift for her regardless of how long you’ve been together.

Gift giving can create a lot of anxiety in a relationship because of a present’s sometimes unintended meaning as interpreted by the receiver. Whether you’re in a new relationship or a marriage that has stood the test of time, there are some simple guidelines to follow to insure that you get covered in kisses and not kicked to the curb.

Talk and listen: Many times women think they are dropping hints about what they want for weeks before the gift should be given. Most times men are oblivious to these hints. So if you think you missed the message, try just asking what they want. Even if it’s direct, it will show her that you care about her and want to get her something she would like.

What she wants most is YOU: Spending quality time with you is one of the most valuable things you can give your lady. Take a moment this holiday season to treat her like a princess. Take the reigns in the kitchen and cook for her tonight. These gestures will mean more than anything that comes in a box.

NEW GIRL – Regardless of how far along you are in the relationship, from benign dating to almost boyfriend/girlfriend status—get them something for the holidays or for their birthday. You don’t have to overthink this gift and you should not spend a lot of money, but all relationships—even new ones—do warrant some sort of acknowledgment on momentous occasions. Definitely avoid jewelry, trips or big other ticket items. As noted above, better to get them something that shows you’ve been listening to what they like rather than something that makes a promise about how things are progressing. So, yes to the new book from their favorite author—no to an iPad mini.

LONG TIME GIRLFRIEND – Sometimes a girlfriend can feel taken for granted after a few months or years so any particularly expected gift-giving time is a chance to remind her how special she is to you. Most ladies love jewelry is If you’re not ready to pop the question (which I don’t usually recommend doing during the holidays) try a lovely necklace instead. The box will not be misleading to her. There’s nothing worse than thinking you’re getting an engagement ring and ending up with a pair of earrings.

WIFE – Remember what I said about feeling taken for granted? Now double that if you’re married and triple that if you have kids. What moms value most is free time and peace and quiet. She would probably love a trip to the spa.

If you need help on how to meet women, read more from special blogger Joshua Pompey HERE