How to Decode Mixed Messages from Guys

­
Previous Next
How to Decode Mixed Messages from Guys 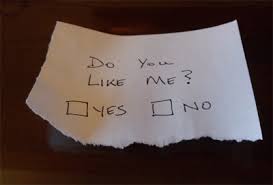 How to Decode Mixed Messages from Guys

Let’s face it ladies, men of any age are difficult to read. Whether they’re young or young at heart, with all those hormones are raging it’s almost impossible to tell what men really mean.

Here’s a quick guide on how to decode mixed messages from guys via the many ways they try to communicate.

BEWARE THE DANGER OF TEXT – Texts can be particularly difficult to decipher. A short response just be his style or it could be a sign of disinterest. It’s nearly impossible to get an accurate understanding of someone’s feelings in short messages that are created on the go. If you aren’t sure what your guy is saying, don’t text back—call or wait until you see him IN PERSON to talk about it.

FACEBOOK FLIRTING – We all know that even your “private” messages on Facebook aren’t really private. He can see that you’ve liked or commented on another friend’s page while posting on his wall leaves a written trail of all your emotional ups and downs. If he’s oversharing on Facebook he runs the risk of turning you off. And, on the flip side, if he’s not sharing at all, he may respecting your privacy. Make sure to respect his as well and never over post to his or any of his friends’ sites.

GUYS LIKE OPTIONS – Men like to keep their options open. If you know he’s talking to you and another girl at the same time, you have to lay down the law before it’s too late. If he thinks he can play you, and if you let him get away with it early on, he’ll call the shots throughout the entire relationship. If he wants to be with you and you let him know that it’s you and you alone, he will have to put up or shut up.

DON’T SAY WHAT YOU DON’T MEAN – The biggest mistake I see with women that I work with is telling a guy that they don’t want to be serious when they actually do. If you have feelings for a guy, don’t pretend that a casual relationship is totally fine with you. In the end, you will end up getting hurt.

WE KID BECAUSE WE CARE – Don’t assume that if a guy teases you, that he’s not interested. Often times it’s a sign of the opposite. If you like him too, bust his chops and see how he takes it. Men like ladies who don’t take things too seriously, so if you show him that you can take and dish it out, he’ll be impressed. But if it’s something that really offends you or makes you uncomfortable make sure to nip it in the bud ASAP.

TAKE THE REINS – No matter the age, guys are often very insecure about women they like. If you have a crush on someone, go ahead and let him know. Even if he hasn’t reciprocated in the past, you never know how he’s feeling to you ask.

Maybe we should hang out sometime. =  I like you as more than a friend

Why are you talking to him? = I have a huge crush on you and I’m intimidated by other guys who are talking to you.

I’ll see you around. =  I’m not interested in you as more than a friend

Nice outfit Nicki Minaj. =  You’re cute and I’m checking you out (from the back).

Whether you’re in a new or old relationship, watch the amount of time you spend on social media talking about your boo. If you want to know when the line needs to be backed away from slowly read more HERE