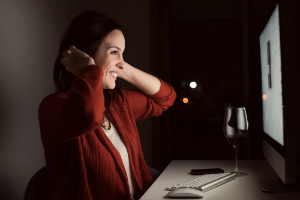 What do you do when you click with someone while simply playing a game?

With online dating becoming increasingly the norm, more and more relationships are forged that might not have been possible otherwise. However, there’s a less traditional occurrence that happens unexpectedly: meeting someone you click with through online gaming. I met my partner in 2009 through an online medieval warfare game (yes, nerdy and I’m proud of it) and people always seem to be in awe when I share my story. However, let me lend some perspective into the reality of taking the plunge when you click in the unlikeliest of ways.

Here are some of the cons:

Traditional online dating usually occurs when someone has made the decision to look for someone. This less traveled route tends to be the opposite, and often backfires if that’s your sole aim (this happens more on games like Second Life and IMVU where people enter virtual reality platforms hoping to find a mate).

You didn’t have the luxury of scanning through a profile ahead of time. It’s also tricky to connect emotionally if one or both of you aren’t expressive or won’t voice/video chat. Tone and visuals are so helpful here.

People often spend far too long (as I did) carrying on with the relationship online and many never actually meet in person. This causes them to lose valuable time they could have spent with someone more accessible.

Usually when people aren’t on the game hoping to find that special someone they craft a whole story about their lives. Often, those stories aren’t corrected for the sake of honesty. This includes being married when they say they’re not. Google is your friend here, right down to a Google Image search on pictures they share of themselves to ensure there’s no “catfishing” going on. Insist on a video chat to speak “face to face”. Make sure who you’re talking to is really who they say they are from the beginning.

That’s something you have to figure out first before you take that step into reality with them.

My biggest adjustment with my partner is that I’m a neat freak and he is erratic. I like structure and he likes to do things on a whim more often than not. It was hard to find a middle ground there when we first decided to live together. He was intensely religious, whereas I was more spiritual than anything. He came from an advantaged family. I had a less opportunistic upbringing. There was a lot we couldn’t relate to about each other. Thankfully, there was a lot we also had in common and we worked out a great balance.

This is one of the big dealbreakers. It could even mean relocating across the country or even internationally, which is a huge expense and immigration battle for most. Either or both of you could have children, jobs you can’t part ways with or mortgages. It’s a big sacrifice for both, but even more so for one of you if you choose to go into real-life relationship status.

However, here are some pro’s as well:

This also means this is an interest that neither of you are going to hold against the other, which tends to happen when someone who loves gaming ends up with someone who loathes it.

Oddly, this ends up being a lot of quality time while getting to know each other. To this day, my partner and I still have “battle date nights” where I make a great dinner, we grab some great wine, and sit with our laptops while destroying other people in the game. It sounds dorky, but it’s fun to do together.

In short, I often tell people this: if you have that unexpected connection with someone, no matter “where” you meet, it’s worth quietly exploring and seeing if it’s solid enough to consider pursing. Don’t let emotions get the best of you by becoming hopeful that it’ll just work out when there’s a lot of obstacles that are difficult to overcome; that can lead to a very bad breakup and sacrifices that shouldn’t have been made. Be realistic, observant, inquisitive and honest. Transparency between you is vital for figuring out if this is just an “I’m interested because I’m lonely” or “I’m interested because I’m bored” moment or an “I’m grateful and lucky that out of haystacks I found this itty bitty needle” moment.

If it’s the later, then it’s worth it to investigate- but with a clear head and analytical approach. You never know what you may miss out on!

Sara is a freelance writer with a passion for travel, cultural enlightenment and exploring her culinary prowess.