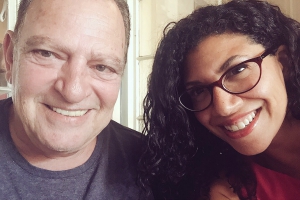 When the high holidays are here, I always tend to think a little more Jewishly so it was fitting that JDate founder Joe Shapira was in town and wanted to sit down with me. We grabbed a cup of coffee and chatted about his new dating app Jfiix which is already stealing the dating show in Israel and preparing to make it’s move into America.

To Be Jewish or Not to Be Jewish, That is the Question

Joe acknowledged that his original reason for starting JDate was a concern that people of Jewish faith were choosing non-Jewish partners and opting to not raise their children Jewish. It’s not the first time that I’ve heard the statistic about the Jewish faith dying out through mixed marriages but in my dating coaching and personal experience I’ve found that the Jewish culture is so strong that it’s often retained in mixed relationships – or maybe that’s just because I live in Hollywood.

However, Joe recognized during his time at JDate that non-Jews were using the site and many were willing to convert and seeking out Jewish partners (you know what they say “Once you go Jewish, you never go…”) He added bio and search fields for non-Jewish daters and still the Jewish faith did not go extinct. The focus, however, is still on Jews meeting other Jews so all the Jewish mothers can be happy.

Joe left JDate in 2005 but he has never lost his love for the business of making marriages from online connections. His passion for helping Jews meet and fall in love has brought him back into the game with a new app called Jfiix.

Where Do I Swipe?

At Jfiix there is a major focus on communication. No swiping, no endless lists of matches, just good old fashioned messaging. Joe believes that is at the root of making good connections so on Jfiix everyone is able to search and send messages for free. He’s returned to the former JDate token model where you purchase the ability to read messages and access premium features.

Jfiix aims to service the full range of daters from casual to marriage-minded. They don’t believe in using bots or sending fake messages (like some skeezy sites that have recently had scandalous security breeches.) Real communication is the Jfiix goal.

It seems to be working considering they’ve already had 25 marriages in the short 1.5 years that Jfiix has been in existence. The online dating business is moving to mobile along with the rest of our lives and Jfiix is poised to move with the new generation of Jewish singles.